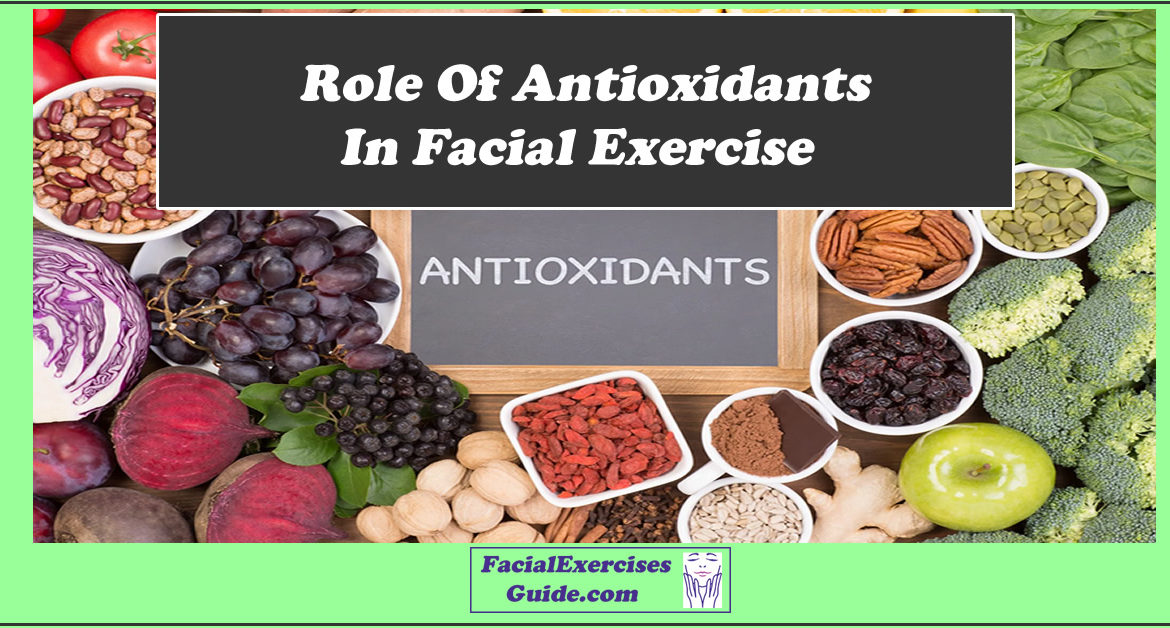 The Role Of Antioxidants In Facial Exercise

First, You Need Some Background In Antioxidants

If you know about antioxidants, you know that these are substances that quench free radicals. Antioxidants include vitamins A, vitamin C, vitamin E, selenium, and a few B vitamins, too. But that’s not everything. The scientific world has accepted certain polyphenols in foods such as tea as antioxidants.

You may have heard some of their names:

There are dozens, if not hundreds of antioxidants when you count all the carotenes and polyphenols found in plants in nature. And it’s a good thing because we need them to fight against free radicals.

Free radicals are created in the body as a result of breathing oxygen. They’re also created inside your body during normal metabolic processes.

Free radicals oxidize nucleic acids, proteins, fats and DNA and can cause degenerative disease. Some of the known free radicals are peroxide, hydroperoxide and peroxyl radicals.

Antioxidants combine with free radicals and thus take them out of the circulation where they will go to different organs and start damaging them.

The key to health and prevention of degenerative diseases is to reduce your free radicals in your body as much as you possibly can.

What Antioxidants And Free Radicals Have To Do With Facial Exercises

When you’re doing facial exercises, you may already have noticed that it takes awhile for your facial muscles to get used to the exercises.

Some facial exercise experts report that it’s important to never do ALL the exercises full strength in the very beginning.

This is because you will be far too tired to continue – and may give up hope that facial exercises will work for you long before you give it a fair trial.

But why is it that you are tired?

It’s actually because the muscles in your face are no different than your muscles in the rest of your body. When you exercise, your muscles process oxygen at higher rates than when you are sitting quietly or lying down.

And since the result of the processing of oxygen is free radicals, your body is now deluged with free radicals.

Free radicals can cause inflammation, and this is part of the reason why you may feel that your body aches after working out. The buildup of lactic acid in the body after exercise contributes to the tiredness that results.

They Died To Bring You Antioxidant Information

Have you ever heard of the time in the 1980s when runners and highly trained athletes were dropping dead from heart attacks?

One health expert analyzed what was occurring and concluded that the only things the athletes had in common were:

Now, you certainly won’t be dropping dead from facial exercises! But if you had a higher level of antioxidants in your system, you would be able to perform more facial exercises.

This in turn will get you to your goal – a more youthful appearance – a lot sooner.

What Antioxidant Foods Do You Need?

Coincidentally, the foods high in vitamin A, vitamin C, vitamin E, and beta carotene are also the foods that contain quite a few of the plant polyphenols and other compounds that are known antioxidants.

So you can kill two birds with one stone and get more vitamins as well as more antioxidants from eating these high antioxidant foods.

What types of foods should you eat to help you accomplish the goal of more youthful skin?

If you can’t stand the unsweetened cocoa powder – and who can – then at least go for the dark chocolate with very little sugar.